Professor Silber teaches and writes in areas that relate to consumer law, commercial law, legal history and nonprofit corporations. He joined the Hofstra law faculty in 1989, after practicing with the New York City law firm of Patterson, Belknap, Webb & Tyler, and serving as a law clerk to Judge Leonard I. Garth of the U.S. Court of Appeals for the Third Circuit. Prior to entering law school, Professor Silber taught history at Sarah Lawrence College and Yale University. He is an interviewer for the Columbia University Oral History Research Office.

Professor Silber's most recent books, With All Deliberate Speed: The Life of Philip Elman, An Oral History Memoir (2004), and A Corporate Form of Freedom (Westview Press, 2001), concern the legal history of Post-World War Two America, and the development of the law of nonprofit corporations, respectively. He has also written a widely acclaimed book about consumer protection, Test and Protest. His articles have appeared in the Harvard Law Review, the Columbia Law Review, the Pittsburgh Law Review, the Stanford Law & Policy Review, and other academic journals. He also scripted a PBS television documentary about risk and consumer regulation. Professor Silber is a past chair of the Association of the Bar of the City of New York Consumer Affairs Committee, and a past director of the American Council on Consumer Interests. Currently he serves as a director of Consumers Union, the publisher of Consumer Reports magazine, and is the past editor of Advancing The Consumer Interest: A Journal of Consumer Law, Policy and Research. He is a fellow of the American Bar Foundation, and a member of The American Law Institute.

6. REFORMER AT HEART: THE ORAL HISTORY OF JUDGE BERNARD S. MEYER (Historical Society Of The Courts of the State of New York (in progress, 2009))

4. From The Jungle To The Matrix: The Future Of Consumer Protection In Light Of Its Past, in Chap. One, CONSUMER PROTECTION IN THE AGE OF THE 'INFORMATION ECONOMY,' (WINN, ED.) (ASHGATE)(2006).

3. WITH ALL DELIBERATE SPEED: THE LIFE OF PHILIP ELMAN, AN ORAL HISTORY IN MR. ELMAN'S WORDS (UNIVERSITY OF MICHIGAN PRESS)(2004) (widely reviewed; praised by Anthony Lewis, Richard Posner, Drew Days, Roy Wilkins and many others.

83. Article, Charitable Debt Calamity: How Nonprofits Fell Into the Auction-Rate Securities Trap; The Problems that Lie Ahead? (in progress)(2009).

81. Article, Thriving On Adversity: Corporate Treatment and Mistreatment of Consumers in the Wake of Hurricane Katrina (in progress) (2009)

62. Moderator/ commentator, "Energy, The Environment and the Consumer," Panel on Consumer Responsibility, Mar. 19, 2009.

58. Presentation, "Online Advertising and Consumer Protection," University of California at Berkeley, Boalt Hall Law School, Center for Law and Technology, Conference on the Law and Business of Online Advertising, April18, 2008.

53. "Transplanting and Amplifying an Interviewer's Voice: One Response to Some Persistent Critiques of the Value of Oral History," Annual Conference, Oral History Association, Providence, R.I. (2005)

44. Selected to conduct an oral history of the New York Court of Appeals by the New York State Bar Foundation and the Chief Judge of the Court, 1999.

33. Invited Participant (consumer perspective), Meeting of Law Revision Commission regarding revisions to Article 8 of the Uniform Commercial Code, May, 1996.

32. Panel Discussion Moderator, "Consumer Grievances in Managed Health Care: Is there a Role for ADR" Association of the Bar of the City of New York, March 21, 1966.

31. Panel Discussion Moderator, Predatory Lending: Can Borrowers or Responsible Lenders Afford to Let it Continue? Association of the Bar of the City of New York, April 30, 1996.

28. Invited participant, Meeting of the New York Law Revision Commission regarding proposed revisions to Articles 3 and 4 of the Uniform Commercial Code, October 1994.

25. Joint-author (principal drafter), Report on S. 5144, Revisions to Articles 3 and 4, New York Uniform Commercial Code, Consumer Affairs Committee of the Association of the Bar of the City of New York, August, 1994 (30 committee members).

24. Panel discussion moderator, "Who's Looking Out for Low Income Consumers?" Association of the Bar of the City of New York, May 17, 1994.

22. Commentary, "The Impact of the Second World War on Legal Thought," 1994 Annual Meeting of the Legal History Section of the American Association of Law Schools, "World War II and the Construction of Public Law," January 1994 (sold on cassette).

19. Article, Consumer Protection and Preemption in a Federal System, in PROCEEDINGS OF THE INTERDISCIPLINARY CONFERENCE ON GOVERNMENT STRUCTURES IN THE U.S. A. AND THE SOVEREIGN STATES OF FORMER USSR (1992)(Greenwood Press) .

12. Panelist, "Checks and Balances," Banking Law Committee and LACE committees, Association of the Bar of the City of New York, Spring 1991 (sold on cassette).

8. "Consumers Union at Fifty," keynote speech co-written for delivery by Walter Cronkite on the occasion of the organization's fiftieth anniversary banquet, 1986.

5. "The Growth of the National Market and the Myth of the Passive Consumer," presented at the Annual Conference of the Organization of American Historians (1984).

4. Presentation, "Problems of the Atomic Age: Nuclear Fallout in Food," presented at the Annual Conference of the Organization of American Historians (1983). 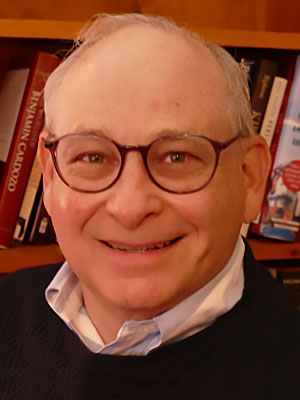